Don’t Put It Off: 6 Tips for Combating Procrastination 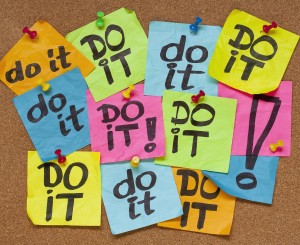 Procrastination can easily be excused as being fueled by our busy lives — but overly-booked schedules, meetings running long and unscheduled check-ins can only explain so much. And time management tools can only help so much. To really address the issue, we need to look deeper than just how much is on our plates. If we really examine what tasks and issues we’re consistently not facing, it’s usually rooted in a deeper issue. While poor time management contributes to the problem, an inability to face fears and manage emotions is really the root of the problem. More than anything, procrastination is about the fear of losing, the fear of guilt, and the fear of making a mistake.

In fact, procrastinators are often so driven by the fear of failure or of not meeting their self-set standards of perfection, that they’d rather be perceived as lacking effort than lacking ability. It’s a self-defeating cycle because they tend to believe deep down that they can’t do the task successfully or don’t deserve the positive outcome that can result.

Combine this with findings that indicate procrastination shares a strong genetic link with impulsivity, and it can start to feel like the issue is out of our hands, but by recognizing when we’re starting to procrastinate and implementing some hard-learned tactics, we can combat this destructive habit.

Break It Down Into Smaller Steps

Even renaming your To Do list can help. Intimidated over the implementing and planning you have to do? Try breaking the task down into more manageable, concrete verbs instead of big, abstract objectives. Or try breaking up the task into smaller segments and doing one a day, for example.

Set and enforce personal deadlines. As noted above, chopping up tasks into smaller pieces can make the work seem more manageable, but setting deadlines for yourself can improve your ability to complete the task.

Rewards — however big or small — can be a great motivator to get stuff done. If we can train our brains to see task completion as a positive experience rather than an overwhelming one, then we can really work toward reducing procrastination. So reward — rather than punish — yourself for achieving a task or goal.

It’s easy to become weighed down by self-doubt before even starting a project, so much so that it becomes even more difficult to begin. But, studies have found that one of the keys to breaking the procrastination cycle is to forgive yourself for past failures or guilt. Otherwise, you’re likely to go down an endless cycle of shame.

Fear holds us back in many ways, but in business, perhaps none is so strong as the fear of failure. But we’ve seen time and time again that successful people make more mistakes than others. They just never give up hope or stop trying new things. Force yourself to get out of your comfort zone and take action.

Ultimately, there’s really no trick to short-circuit your brain. Sometimes, you just have to roll up your sleeves, dig in and get started. Once you take that first step, you’ll be surprised at how much easier the next one is.