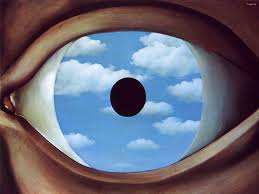 Commerce relies on the imagination and talent of graphically inclined artists. At the dawn of broadcast television, for example, surrealist Rene Magritte’s “The False Mirror” (1928) profoundly inspired CBS designers who came up with their own version of the eyeball as the network logo. A few years later, they ditched the background skies. The pop art of the ‘60s aesthetic inspired the ABC font and black dot logo, created by graphic designer and artist Paul Rand.

Perhaps it is cliché to fault corporate designers with relying too much on the imaginative strengths of artists, but the rich connection between art and commerce is valuable and revealing for us creatives. It illustrates the often hidden push-and-pull forces of imagination and reveals the pathways of inspiration. Inspiration is everywhere, and who best to turn to than those for whom imagination and art are daily labors?

To fully inhabit the role of a creative means to take in art, literature and entertainment and beyond. Inspiration is indeed everywhere, but you need to know what you’re looking at and apply that your own work. Perspective helps find creativeness and understand what to do with it.

Where do you find inspiration? Follow our Think Like A Tourist series, where we discuss how to think creatively.