We’re still in the thick of it, but we’re having a blast working with PromaxBDA on branding  The Conference 2014, which takes place June 10-12 in New York City. This year’s theme is #WTFuture. 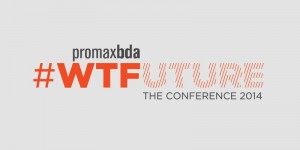 Out of chaos comes beauty, out of disruption comes opportunity. Building on this idea and “embracing the mayhem,” we played on the cheekiness of the #WTF hashtag in order to promote the event and encourage engagement across social platforms, as well as tie in social medias’s relevance to discussions at the conference.

The campaign starts with website takeovers, digital banners and email newsletters – all of which were designed behind the concept of a “window” into the future. From here, the design will be rolled out over the entire collateral for the conference, from room signage and banners to The Conference program. In an attempt to unify the ancillary events that happen in conjunction with The Conference, the flexible design has provided the perfect template to make the Promo Boot Camp and the Elite Member Events feel like they are an integral part of The Conference.

Images are central to the way we communicate in today’s media landscape, and that’s why our branding package for the conference depends so heavily on symbolism. So, rather than provide a single piece of hero key art or simply variations of it, we conceived a graphic framework which opened our design to various interconnecting images within the #WTFuture theme in inspiring and unusual ways. Creating a visual nomenclature was also key to getting our intended audience to participate in the construction of the meaning of the campaign itself, to encourage them to help construct what the future may be.

With changes in our industry, such as more ad dollars going to digital than broadcast, it’s an exciting time to see what emerges. Our view of the future is not dystopian, but rather that it holds many exciting possibilities, and we encourage everyone to optimistically embrace it. Aesthetically, our designs suggest as much with bright colors, while digital noise in the overall graphic overlay reminds us that the future is ever coming into focus.

The design package ultimately served up a dose of inspiration for the intro video that we’re also producing for The Conference. We can’t wait for you see it, so stay tuned!

Never ones to turn down an opportunity to soak in as much creative inspiration as possible, we’ll be at the conference to cheer on our colleagues and clients as well as learn from them, including keynote speakers Tom Freston of Firefly3, Shane Smith of VICE, and Robert Rodriguez of El Rey Network.