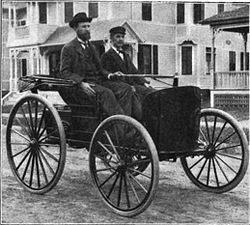 Over a hundred years ago this month, the Duryea brothers built one of the first one-cylinder automobiles. Charles & Frank Duryea were innovators and entrepreneurs, but like so many talented people, they were beat to the market by others. For most of their lives, the Duryea brothers came to resent their lack of fame compared to the veritable Henry Ford.

Amongst themselves, the brothers were also embroiled in a bitter legal battle over who had actually built the first car. The dispute ended only with older brother Charles’ death in 1938. Instead of wasting time and energy on fighting, harboring resentment, and continually defining themselves against their betters, what if they charted a new course, embracing their role as early adopters and finding new ways to apply their skills to new projects and possibilities? Imagine what their passion for innovation could have yielded then?