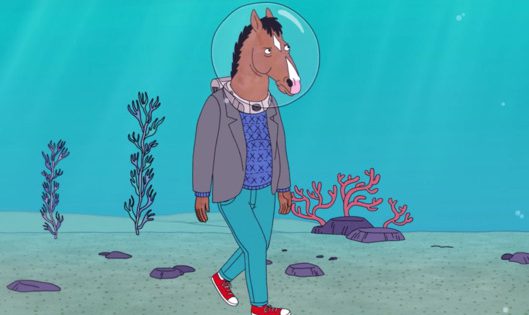 Trust Me, I’m a Celebrity: BoJack Horseman and the Need to Trust Your Audience

BoJack Horseman may already have wrapped up its third season, an admirable feat in a television climate of shows where something as clever, melancholy and, well, different as the Netflix original often don’t make it through an entire first season. Still, it’s only 37 episodes (and one Christmas special) in — a little more than a season and a half in broadcast years — and it’s already taken leaps with how much it trusts its audience.

In season 3, episode 4, “Fish Out of Water,” the entire show takes a shift stylistically, with a muted, underwater color palette, and in tone and in dialogue (spoiler alert: the episode is mostly dialogue-free) in a stark series departure that New York Magazine’s Vulture vertical says, “plays out as if the iconic Looney Tunes director Chuck Jones were tasked with doing a Charlie Chaplin–inspired Fantasia segment.” It’s also been compared to Lost in Translation and what the A.V. Club calls, “nothing short of a masterpiece.”

How is one episode of an (admittedly) charming, hilarious and sweetly bleak series about a talking washed-up B-list celebrity horse trying to find happiness enthralling audiences and critics alike? Because series creator Raphael Bob-Waksberg and his team did something we don’t see nearly enough in media anymore — they trusted their audience. It’s the reason critics were so fond of the first three seasons of NBC’s “Community” when showrunner Dan Harmon was firmly in place and made it clear that his goal was to entertain those already invested in his show and not worry about making it broad and palatable for new fans to jump in. This may not have won him great ratings, but it did win him the loyalty of his fans, such that even after being replaced in season 4 (for a number of reasons), NBC still brought him back for season 5, and Yahoo! was willing to take a chance on season 6. Six seasons and a movie became the rallying cry of the “Community” fanbase, and they may still get their wish.


While it’s unwise to ignore a wider or untapped market, especially for those of us whose jobs it is to create dynamic campaigns that draw in, hopefully, larger audiences for our clients, there’s a greater value to an engaged, invested consumer or viewer who appreciates that the brand is talking directly to them and is investing in their relationship. One rabid BoJack fan is more likely to insist to their friends that they have to watch all three seasons of BoJack just to get the full depth of “A Fish Out of Water” vs. three casual viewers who may tune in to just that one episode and think “eh, this is just a visually beautiful, silly cartoon.” If you’ve been invested since the beginning, the full pathos, aching regret and beautiful rays of hope that pierce through the underwater depths are a full payoff.